Here are my favorite books for 2017. These are ones that I gave 5 stars to in Goodreads but don’t include the adult books I read (or, more often, listened to) as they are outside the purview of this blog. My shift towards YA and away from middle grade is virtually complete – I have read some middle grade this year but not very much and only one book makes it onto my list. While some of these YA novels read a little younger than others, they are all definitely intended for a teen, rather than tween, reader.

Realistic Fiction
Genuine Fraud by e. lockhart
The Hate U Give by Angie Thomas
Little Monsters by Kara Thomas

The Empty Grave (Lockwood & Co. book 5) by Jonathan Stroud
A Face Like Glass by Frances Hardinge
Scythe by Neal Shusterman
Still Life with Tornado by A. S. King
They Both Die at the End by Adam Silvera
Thick as Thieves by Megan Whalen Turner

There is also one late addition that I have read but not yet posted a review for, but will do at the beginning of the year:
A Skinful of Shadows by Frances Hardinge

Here are my favorite books of 2016. These are all ones I gave five stars to on Goodreads, and unlike last year’s list which was dominated by realistic fiction, this one is almost wholly speculative.

The list is in alphabetical order and I’ve split it into middle grade and YA, though some are more borderline than others, particularly both Hardinge books..

Though my actual paying job has meant that I haven’t been able to read and blog as much as in the past, I’m planning to keep going with at least a weekly post.

As I Descended by Robin Talley

The Emperor of Any Place by Tim Wynne Jones

Salt to the Sea by Ruta Sepetys

The Scorpion Rules by Erin Bow

A Taste for Monsters by Matthew J. Kirby

The Creeping Shadow by Jonathan Stroud

The Lie Tree by Frances Hardinge

The Scourge by Jennifer A. Nielsen

Sophie Quire and the Last Storyguard by Jonathan Auxier

The Cybils finalists were announced on Saturday, and you can peruse them all here. These shortlisted books will now be read by the second-round judges, and the winners will be announced on Valentine’s Day. Just a reminder that the criteria used for selection are kid appeal and literary merit, so you know you’re on safe ground with recommending these books for kids (unlike a certain other set of awards, due to be announced next Monday, January 11, which only looks at literary merit and, consequently, often selects some snoozers, thus enabling adults to torture kids by insisting they read these books as they’ve won a prize).

The shortlist for the category that I’m judging, Elementary and Middle Grade Speculative Fiction, is as follows:

The Dungeoneers by John David Anderson

The Fog Diver by Joel Ross

I’ve only read and blogged about Mars Evacuees, which I liked very much, so I’ll have my head down for the next few weeks reading and discussing. It’s always a great opportunity for me to read titles I might not otherwise come across, so I’m excited to get started. 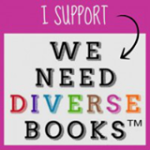 After last year’s KidLitCon, I checked the books I’d read that year to assess how diversely I’d been reading. I felt I’d been doing OK, but could do better and set myself the objective of actively looking out for books with more diverse characters this year. So how have I done?

Well, again the answer is I’d did OK, definitely better than last year but still room for improvement.

Firstly, thanks to Goodreads for sending me my 2015 in Books – it made my task so much easier! I have recorded 87 books this year and I looked at whether the main characters or support characters (important, not just background) were diverse. Here are my stats – note that I have only recorded each book once, no double dipping!

Racial/cultural diversity: 21 books with main characters, and 9 with support characters.

GLBQT: 4 books with main characters and 2 with support (showing the sad demise of the gay best friend for the white girl in my reading this year).

Mental or physical challenges: 5 books with main characters and 4 with support.

This gives a total of 45 books with a diverse main or support character – just over half the books I read.

I think some of this is because I read a lot more YA books this year, and also I did actively try to read more broadly. Overall, I feel it’s a decent proportion and I would like to keep that up, maybe even increase it over the next year.

I’m deliberately calling these books ‘favorites’ rather than ‘best’, because I think what I enjoy reading is not necessarily going to be in the running for medals. My criterion is that I gave the book 5 stars on Goodreads. I thought I was being less profligate with my stars this year – I was very influenced by this article – but it turns out I have far more top-rated books this year than last (15 versus 9). Maybe I’m just choosing more appealing books to read?

Anyway, here’s this year’s list. Compared to last year’s there’s a lot less speculative fiction, and a lot more YA realistic fiction. I think this is probably more to do with what I’ve been interested in this year rather than a seismic shift in the market. They are in alphabetical order by title as it was too much work to rank them

The Dead I Know by Scot Gardner (realistic fiction)

Most Dangerous by Steve Sheinkin (nonfiction)

A Sense of the Infinite by Hilary T. Smith (realistic fiction)

What We Left Behind by Robin Talley (realistic fiction)

The Castle Behind Thorns by Merrie Haskell (speculative fiction)

The Imaginary by A. F. Harrold (speculative fiction)

Once again I’m thrilled to have been selected as a judge for the Cybils – the awards for children’s and YA literature selected by book bloggers. For the fourth year, I will be joining some other fab bloggers to look at elementary and middle grade speculative fiction.

In my previous stints, we chose The Cheshire Cheese Cat by Carmen Agra Deedy, The False Prince by Jennifer Nielsen and The Luck Uglies by Paul Durham – all excellent and highly entertaining reads.

The Cybil awards look at both literary merit and reader appeal, which (I think) gives them a leg up on the higher profile awards like the Newbery, which don’t have to take readers into account. Which, again in my opinion, is why they’ve sometimes ended up with some duffers that no kid would ever willingly read.

Anyway, the Cybils are currently in the nominations phase, which is followed by the panelist stage, in which some mighty speed-reading bloggers whittle the enormous list of nominations down to a manageable number. Then between January 1 and the middle of February, we judges read and pontificate, before selecting a winner!

Me and Patrick Ness.

It’s the first anniversary of bibliobrit – a year in which I have written 106 posts and reviewed over 100 books. Rummaging through the stats of my blog, here are some first year facts:

Here’s your opportunity to go back and read them. They’re really not that bad, and they’re about books that are really good.

So, let’s cut the cake and pop the cork! and here’s to a second year of bibliobrit. Feel free to let me know if there’s anything you like or don’t like about the blog, and if there’s some books you think I should add to my TBR pile.

The Cybils are now into the second round of judging, which is where I swing into action! Along with four other judges, I will be evaluating seven titles in the Elementary and Middle Grade Speculative Fiction category. Here are our finalists, of which, you’ll note, I’ve only blogged about Boys of Blur:

The Swallow by Charis Cotter

Jupiter Pirates: Hunt for the Hydra by Jason Fry

Nuts to You by Lynne Rae Perkins

Boys of Blur by N.D. Wilson

The Luck Uglies by Paul Durham

The Castle Behind Thorns by Merrie Haskell

I’m looking forward to getting stuck into reading and discussing these books with my fellows, but can’t blog about any of them until our decision is announced on February 14th.

So, to keep you entertained while that’s going on, I’ll post some older reviews and maybe slip in a few new ones if I have time.

With all the publications putting out their best lists, and with the Newbery and Printz awards just around the corner, I thought I’d put together my top reads for 2014 too. A few years back, I had something of an epiphany, when I realized that my favorite books were never going to win the Newbery because I evaluate books on different criteria to the judges – sure, I like good writing, but what really works for me (and many kids) is the voice and the plot of a book. And I think this explains why I find so many Newbery winners to be such snoozers – because kid appeal just isn’t a consideration. Unlike the Cybils – where we look at books for both good writing and kid appeal!

Anyway, of the 77 books that I’ve read this year, here are the nine that I gave 5 stars to:

The Boundless by Kenneth Oppel

The Night Gardener by Jonathan Auxier

The Whispering Skull by Jonathan Stroud

Glory O’Brien’s History of the Future by A. S. King

The Scar Boys by Len Vlahos

We Were Liars by E. Lockhart (I read this before I started blogging, so no review I’m afraid)

What I notice is that these are all, bar one, speculative fiction. It’s not that I don’t read other genres, it just seems to me to be the one that speaks to me more.

I was at KidLitCon last weekend, which was on the theme of ‘Blogging Diversity in Young Adult and Children’s Lit: What’s Next?’ Kelly Jensen, of Stacked and Book Riot, threw down the challenge to us all, to audit what we read and assess how diversely we are reading. I decided to have a look, with a sneaky feeling that the answer would be: not very. And, indeed it was.

It’s not a particularly scientific audit – I just went back through Goodreads for 2014 and tried to remember if a book had a main or support (but important, not just in the background) character that was ethnically or culturally diverse, in any way mentally or physically challenged or GLBQT.  I realized that somehow I didn’t have any shelves that would highlight ethnic and cultural diversity – fixed that straight away. Because I’m a bit lazy, I did not check the diversity of authors as that involved me looking stuff up.

Of the 51 kid or YA books I’ve read so far this year, as far as I could remember there have been a total of 12 with diverse main characters (mostly ethnically or culturally diverse) and 16 with diverse support characters (pretty evenly spread across my three categories – well done, the gay best friend!).

So not as bad as I thought, but I definitely could do better; so I’m planning to actively look out for books with diverse characters in the future. (And also try and read a bit more – 51 was a lot lower than I thought!)